If the PISA rankings exposed the poor quality of education in India’s schools, the “QS World University Rankings” for 2012 released today showed that our universities and even “institutes of excellence” do not fare any better when compared to their international counterparts.
Not a single Indian university or institute has made it to the top 200 of the Quacquarelli Symonds (QS) rankings — the most reputed global rankings of institutes for higher education.

“India remains the only BRICS nation without a university in the top 200. Two of the leading three institutions, IIT- Delhi (212) and IIT-Kanpur (278), have improved on their 2011 positions. Yet the comparison with other BRICS nations remains unflattering,” writes Danny Byrne, editor of topuniversities.com — the QS rankings website.

Even in the Asia rankings, which is topped by the Hong Kong University of Science & Technology, India has just 11 institutes in the top 300 while China, Singapore and South Korea continue to surge ahead. Nine Chinese institutes have moved up the ranks with Peking University ranking better than the University of Tokyo.

“We see India once again under-performing, with only 11 universities in the rankings, the vast majority of which are various Indian Institutes of Technology. Internationalisation has been identified as a key issue,” says a QS analysis of the Asian rankings.

The discipline-wise rankings present a slightly better picture with the IITs ranking among the top 50 engineering institutes. Delhi University too finds a place in the top 50 universities offering English Literature and Linguistics among others.
Source: http://www.indianexpress.com/story-print/1001254/ 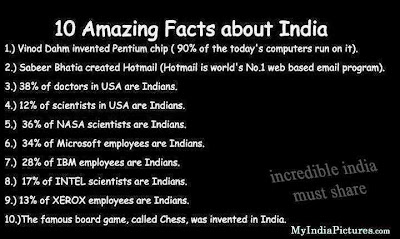 And, one must not forget:
Amazing Facts about India and Indians!

India is the world's largest, oldest, continuous civilization.
India never invaded any country in her last 10000 years of history.
India is the world's largest democracy.
Varanasi, also known as Benares, was called "the ancient city" when Lord Buddha visited it in 500 B.C.E, and is the oldest, continuously inhabited city in the world today.
India invented the Number System. Zero was invented by Aryabhatta.
The World's first university was established in Takshashila in 700BC. More than 10,500 students from all over the world studied more than 60 subjects. The University of Nalanda built in the 4th century BC was one of the greatest achievements of ancient India in the field of education.
Sanskrit is the mother of all the European languages. Sanskrit is the most suitable language for computer software - a report in Forbes magazine, July 1987.
Ayurveda is the earliest school of medicine known to humans. Charaka, the father of medicine consolidated Ayurveda 2500 years ago. Today Ayurveda is fast regaining its rightful place in our civilization.
Although modern images of India often show poverty and lack of development, India was the richest country on earth until the time of oughal  invasion in the early 11th Century. Christopher Columbus was attracted by India's wealth.
The art of Navigation was born in the river Sindhu 6000 years ago. The very word Navigation is derived from the Sanskrit word NAVGATIH. The word navy is also derived from Sanskrit 'Nou'.
Bhaskaracharya calculated the time taken by the earth to orbit the sun hundreds of years before the astronomer Smart. Time taken by earth to orbit the sun: (5th century) 365.258756484 days.
The value of pi was first calculated by Budhayana, and he explained the concept of what is known as the Pythagorean Theorem. He discovered this in the 6th century long before the European mathematicians.
Algebra, trigonometry and calculus came from India. Quadratic equations were by Sridharacharya in the 11th century. The largest numbers the Greeks and the Romans used were 106 whereas Hindus used numbers as big as 10**53(10 to the power of 53) with specific names as early as 5000 BCE during the Vedic period. Even today, the largest used number is Tera 10**12(10 to the power of 12).
IEEE has proved what has been a century old suspicion in the world scientific community that the pioneer of wireless communication was Prof. Jagdish Bose and not Marconi.
The earliest reservoir and dam for irrigation was built in Saurashtra.
According to Saka King Rudradaman I of 150 CE a beautiful lake called Sudarshana was constructed on the hills of Raivataka during Chandragupta Maurya's time.
Chess (Shataranja or AshtaPada) was invented in India.
Sushruta is the father of surgery. 2600 years ago he and health scientists of his time conducted complicated surgeries like cesareans, cataract, artificial limbs, fractures, urinary stones and even plastic surgery and brain surgery. Usage of anesthesia was well known in ancient India. Over 125 surgical equipment were used. Deep knowledge of anatomy, physiology, etiology, embryology, digestion, metabolism, genetics and immunity is also found in many texts.
When many cultures were only nomadic forest dwellers over 5000 years ago, Indians established Harappan culture in Sindhu Valley (Indus Valley Civilization).
The four religions born in India, Hinduism, Buddhism, Jainism, and Sikhism, are followed by 25% of the world's population.
The place value system, the decimal system was developed in India in 100 BC.
India is one of the few countries in the World, which gained independence without violence.
India has the second largest pool of Scientists and Engineers in the World.
India is the largest English speaking nation in the world.
India is the only country other than US and Japan, to have built a super computer indigenously.
Posted by Sati Shankar at 10:57 AM

Though ranking has always been accuesed of being biased, say for example the citation and weights assigned to research juornals and publications of a certain regions, but even then we can not ignore the falling back in academic institutions, so proud in themselves, but most of them nowhere with respect of contribution to knowledge, even if measured by quantity lest aside quality.
More shameful is the situation where thousands of millions are siphoned out by corrupt power holders and villages are running schools under the trees without a blackboard.