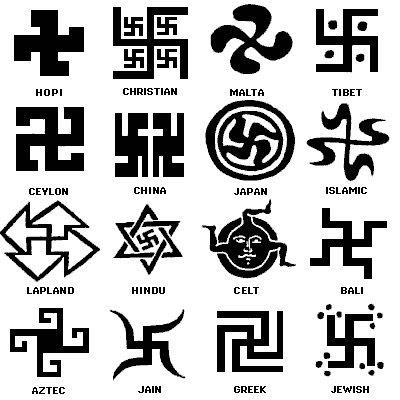 The Swastka is the oldest known symbol on Earth. It has many different names and has been depicted both ways (clockwise and counter clockwise) throughout ancient history. Its all part of Sacred Geometry! The Swastika is usually depicted as a symmetrical cross with its arms bending at right angles. In geometric terms, it is known as an irregular icosagon or 2
0-sided polygon. The word swastika comes from Sanskrit and literally means ‘well-being’. It describes a lucky object or a mark denoting good luck. The symbol appears in many ancient cultures with different meanings attributed to it. They found relics depicting this image in countries like Tibet, Greece, India, Iraq, Iran, Armenia, China, Japan, Ireland and Britain, Sweden, Norway, Europe, South America and even North America. Tribes like the Navajos and the Hopi natives still use the symbol in their traditions today. Many cultures have used it as a symbol for peace and tranquility, others have used it as a good luck charm or as a way to channel energy from the collective source. In Buddhism the Swastika represents eternity and it appears on the chest of some statues of Buddha. In Hinduism it represents Sun’s rays, upon which life depends. As well in Christianity swastika is used as a hooked version of a Christian Cross and appears in many ornaments and church decoration.

In the 1930s and 40s, the Illuminati and the Nazis hijacked the symbol and flipped it around. Some Nazis believed it made them more powerful. Their abuse of the symbol, made everyone else demonize it and think its negative, when in reality, its far from negative. This symbol has been around for as long as we've kept records of human activity on this planet. Other than its use by the Nazis, it has ALWAYS been considered a POSITIVE symbol.
—
Posted by Sati Shankar at 10:38 AM