Beef exports up and Cruelty Beyond Imagination

CHENNAI: The Centre's Pink Revolution to promote meat production and export has led to a 44% increase in meat consumption and export in four years, but it has failed to regulate the industry.

According to data compiled by the animal husbandry departments of all states, meat from registered slaughterhouses increased from 5.57 lakh tonnes in 2008 to 8.05 lakh tonnes in 2011. Export earnings from bovine (beef and cattle) meat expected to touch Rs 18,000 crore in 2012-2013. India became the world's top exporter of beef in 2012.

Uttar Pradesh is the top buffalo meat-producing state with 3 lakh tonnes in 2011. At least 70% of the buffalo meat is exported. "Our meat is lean and cheaper. We supply halal meat, which is preferred in Gulf countries," said Surendra Kumar Ranjan, director of Uttar Pradesh-based Hind Agro Industries.

Though meat meeting international standards reaches markets in the Europe, the Gulf and South-East Asia, most of the meat sold in India is substandard. The best quality meat is sent abroad while B-grade meat reaches the domestic market.

Further, activists say the way animals are transported and slaughtered is cruel and far from international standards. "There is rampant abuse of animals in transport and slaughter of meat whether for domestic consumption or export," said Arpan Sharma, CEO of Federation of Indian Animal Protection Organisations.

The amount of beef consumed and exported from the country has gone up 44% in the last four years, according to data from the Union animal husbandry department. However, animal abuse while transporting and slaughtering is rampant, say activists.

Bovine (buffalo and cow) meat from India is popular in South-East Asian and Gulf countries, said Surendra Kumar Ranjan, director of Uttar Pradeshbased Hind Agro Industries. "Our meat is lean and cheaper. We supply halal meat, which is preferred in Gulf countries," he said.

Animal activists, however, kill this rosy picture. "There is rampant abuse of animals during transport and slaughter whether the meat is for domestic consumption or export," said Arpan Sharma, CEO of Federation of Indian Animal Protection Organisations.

(This Picture is added to news content)
Processed meat exports are expected to earn close to 18,000 crore in 2012-13. The increase is attributed to the Centre's Pink Revolution to promote meat production and export with modernized abattoirs and storage facilities. The food processing ministry had announced subsidies of 15 crore to modernize abattoirs. The buffaloes killed went up from 49.46 lakh in 2008 to 69.6 lakh in 2011.

There are 38 integrated abattoirs in the country which slaughter for export. Agricultural and Processed Food Exports Development Authority (Apeda) inspects them and renews licenses. "The BIS team does checks a few times a year," said Ranjan.

The government's stringent rules on quality of meat have failed to extend to prevention of cruelty to animals. "Animals are overloaded in vehicles and transported without food and water," said Sharma. "None of the meat exporters pay attention to the condition of animals," he said. Most police officers let vehicles through without fining them for overloading as per the Prevention of Cruelty to Animals Act.

The international practice of stunning an animal before slaughter is not followed in India, since Gulf countries want only halal cut meat. "Gulf countries specify that the animal should not be stunned. We stun animals supplied to countries that don't insist on halal meat," said Ranjan. Stunning animals is compulsory in Europe and Australia. "There are norms for veterinary care, feeding and watering during transport," said Sharma. 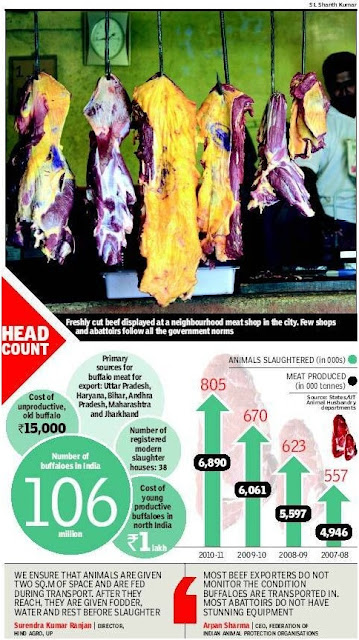