How a political party and Paid Media can support Terrorists

How a political party and paid media can support terrorists and compromise the security of the nation is best exemplified by Congress and it’s affiliate CongressBureau of Investigation (CBI). The latest flip flop by CBI is in the so called Ishrat Jahan fake encounter case. After having used every media vehicle, including news television channels with selective leaks by CBI that Amit Shah and thereby Narendra Modi was involved, news is coming in that the case is close to collapse.

For those who came in late, the Ishrat Jahan encounter case involved encounter killings of Ishrat Jahan Raza, a 19-year old girl from Mumbai, and three men: Javed Gulam Sheikh, Amjad Ali Rana and Zeeshan Johar by officers of the Ahmedabad Police Crime Branch. The encounter was carried out allegedly by a team led by DIG D.G. Vanjara. CBI declared the encounter as staged but offered no proof.
In 2004, a Lahore-based publication affiliated with LeT claimed that Ishrat and her companions were operatives. In 2010, some media outlets  reported that the convicted terrorist David Headley had implicated Ishrat in terrorist activities in a statement given to the National Investigation Agency (NIA). In June 2013, the Intelligence Bureau chief Asif Ibrahim told the office of Prime Minister and Home Minister of India that the Bureau had enough evidence to prove that Ishrat was a part of an LeT module which planned to kill Narendra Modi and Lal Krishna Advani.
Ishrat was close to Pranesh Pillai, a native of Noornad in Kerala. He had migrated to Mumbai in search of a job and had been booked for four assaultcases in Mumbai and Pune, and had also been charged with involvement in a fake currency racket. In the mid-1990s, he converted to Islam and changed his name to Javed Sheikh to marry a Muslim woman called Sajida. Gujarat Police recovered two passports from Javed: one obtained using his original name Pranesh and the second one in his new name.
The third person killed was Amjad Ali Rana, an LeT terrorist from Haveli Diwan, Pakistan and is believed to have met Javed several times in Oman. The fourth person who was killed was Zeeshan was said to have been caught in a trespassing case in Srinagar in 2003. Strangely, nobody claimed the bodies of Amjad and Zeeshan after the encounter.
Here are some questions for CBI
1. What was Ishart Jahan doing with three men for over days, travelling across states?
2. Why did her family allow her to travel with these unknown men and why did they not complain to the police that she was missing?
3. Why is the CBI not confirming the role of Javed Shaikh, an Indian in the group ? What was he doing with two Pakistani terrorists?
4. Why is the CBI not telling the court who Amjad Ali Rana and Zeeshan Johar are and where they hailed from?
5. Why is the CBI not insisting on what David Cleman Headly told CIA about Ishart Jahan ? CBI says and the NIA say that the entire thing is a heresay. Can the CIA then confirm this?
After dithering for over a year, on 21 February 2013 CBI arrested Gujarat IPS officer G L Singhal who was then Assistant Commissioner of Police Crime Branch at the time of the incident. CBI in its FIR alleged that Singhal, played an active role in the encounter which was later found to be fake by the Special Investigation Team (SIT) constituted by the Gujarat High Court.
Surprisingly the CBI did not file a chargesheet against Singhal and he was released on bail. There was quid pro-quo deal as CBI did with former Gujarat DG Sreekumar. In the months to follow, Singhal along with Prashant Bhushan of AAP and Anirudha Bahal of Cobra Post claimed that Amit Shah conducted a snoop on a lady from Gujarat across two states and tried to link Mr Modi to it.
Now the pieces are all falling into place. Congress - CBI - Pakistani Terrorist group LET - Tehelka - Cobra Post - Prashant Bhushan of Aam Admi party (who wants to give Kashmir to Pakistan) are involved in this mission with a single aim, target: Narendra Modi. What the terrorists could not do, the Congress tried – and failed, miserably. 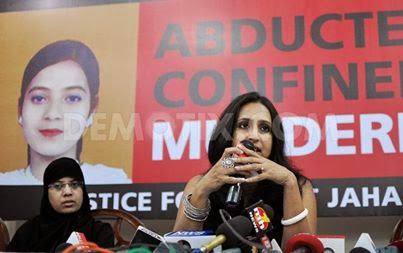