HOW NOBEL PEACE PRIZE HAS LOST ITS CREDIBILITY AND HENCE HONOUR: 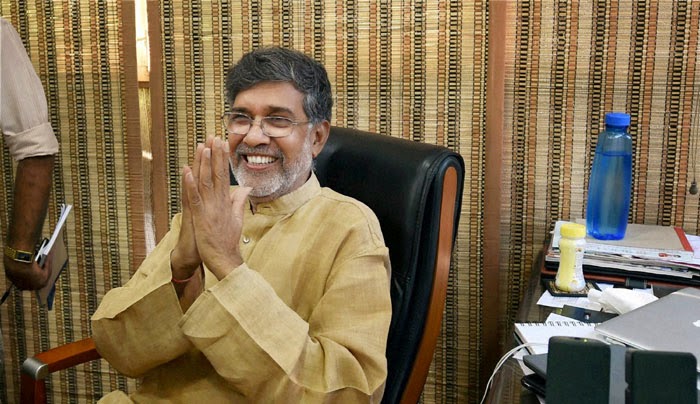 
The announcement of the Nobel Peace Prize for Kailash Satyarthi was somewhat of a shock. Firstly he was practically unknown within India with journalists and others all shaking their heads and asking “Satyarthi who?” Secondly, the announcement from the Norwegian Nobel Committee was both politically charged and condescending:
The Nobel Committee regards it as an important point for a Hindu and a Muslim, an Indian and a Pakistani, to join in a common struggle for education and against extremism. Many other individuals and institutions in the international community have also contributed. It has been calculated that there are 168 million child labourers around the world today. In 2000 the figure was 78 million higher. The world has come closer to the goal of eliminating child labour.


The announcement draws on the old theme of Western “parity” between India and Pakistan, and then calls out the purportedly “Hindu” and “Muslim” affiliations of the awardees. Now, going back at least 10 years we did not find the religion of the awardees mentioned in the Nobel Peace Prize announcement. Barack Obama is not called out as a Christian, nor are the affiliations of Marti Ahtisaari, Al Gore, Mohammad Yunus, or any of the other awardees called out. Why the necessity to call out Satyarthi as a Hindu?

Not that Satyarthi is, by any stretch, a Hindu leader. In fact, Ellen Barry, writing in the New York Times, explicitly points out that he is a Marxist. Here is my exchange with her: 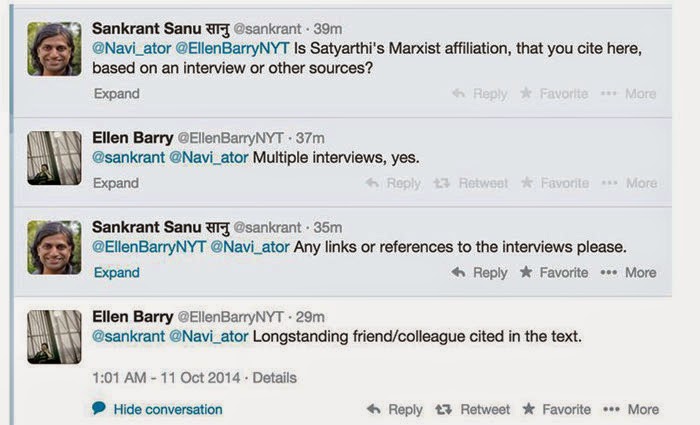 The long-standing friend and colleague that Barry cites is Simon Steyne. Simon Steyne, according to a report in the Telegraph was a Marxist and “A former militant schoolboy who was once considered so dangerous that his activities were investigated by MI5 is working as a senior official for the Trades Union Congress.” Steyne was vice-chairman of the Schools Action Union, an organisation of militants, “An extreme Maoist group” that Steyne himself described as a “”Marxist-Leninist-Liberal broad front”. In any case, all this Steyne says, is in the past.

Would the Nobel Prize Committee call out a Marxist in the West as a “Christian” just as it calls Satyarthi as a “Hindu.” It appears on the lines of “thou protesteth too much”, unusually calling out a religious affiliation of someone who is clearly not properly identified with that label. What exactly are they trying to hide?

Speaking of religious affiliation, it looks like there is another nexus at play.  Of the congratulations Satyarthi got, one came from World Vision who identified him as a “partner.” 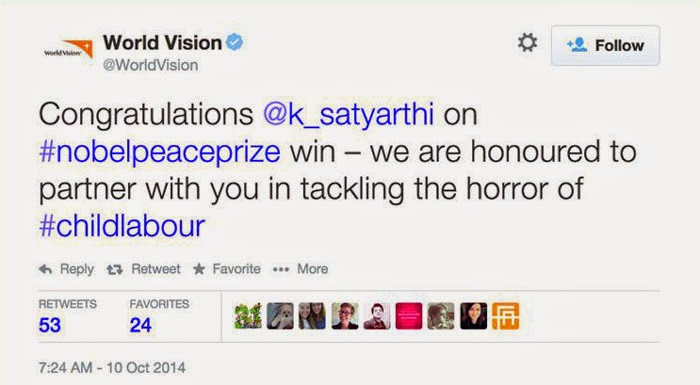 World Vision is powerful evangelical organisation that makes no secret of its Christian affiliation and agenda. Satyarthi partnering with World Vision brings the classic Breaking India nexus into play—using Indian Leftists to pave the way for evangelism mission in India. World Vision declined to provide additional details of their relationship. “Project Rescue:” that aims to bring trafficked children “to Jesus” is another potential link. Other Christian evangelical websites such as “Rivers of Hope”, referenced Satyarthi’s  Bachpan Bachao Andolan rescues, though their exact relationship remained unclear.

Jaya Jaitley, in an NDTV interview after the Nobel was announced, also gave a less-than-glowing review of Satyarthi. Apparently she was quite familiar with his work from the 1980s before he got the Nobel, but she “found the selection of awards rather strange.”

She also mentioned that “we hadn’t heard much about his work lately. He has gotten a lot of international awards and there are some cynical comments on how these awards are selected.” There were many people working on the issue of child labour and Satyarthi’s work was not particularly notable. She called out Swami Agnivesh, who Satyarthi“trained with” as the one who brought this issue to the fore and was the prime mover. It is unlikely a saffron-clad “Hindu” would be given the Nobel, however.

If we take a look at the list of awards that Satyarthi has received, Jaitley’s contention is certainly borne out.

– In October 2002, Satyarthi was awarded the Wallenberg Medal from the University of Michigan in recognition of his courageous humanitarian work against the exploitation of child labor.

Germany, USA, Spain and Italy are certainly prominent among the countries from which these awards originate. Also the US State Deparment has both awarded Satyarthi and funded his Bachpan Bachao Andolan (BBA) during the Bush era.

Finally, Megha Bahree writes in Forbes that her experience with Satyarthi’s Bachpan Bachao Andolan was “Anything But Nobel-Worthy.”  She mentions being taken by a BBA representative on a “tour” to show her child labour for a story she was doing. But none of the places she took her had child labor, till he finally asked her to wait and presented a situation with looked fake to her journalistic eyes. As she pointed out “the problem is that the more children you show “rescued”, the more funds you get from foreign donors.” On that account BBA appeared to be doing rather well. According to Madhu Kishwar, as far back as 12 years ago, he was funded $2 million dollars by US and German foundations.

Kailash Satyarthi has no doubt done some good work.  At the same time he also appears to be deeply embedded in Western institutional structures and sources of funding for a long time. Given that, the pattern of funds, the less than stellar endorsement from peers, Marxist leanings with a “Hindu” tag and relationships with evangelical organisations such as World Vision, we should take our newly minted hero with a grain of salt.

Disclaimer: Opinions expressed in this article are the author's personal opinions. Information, facts or opinions shared by the Author do not reflect the views of Niti Central and Niti Central is not responsible or liable for the same. The Author is responsible for accuracy, completeness, suitability and validity of any information in this article.