Letters between Mahatma Gandhi and Hermann Kallenbach are said to shed light on their 'loving relationship' They are among archive of documents which cover Gandhi's time in South Africa, his return to India and his contentious relationship with his family Papers were due to have been auctioned at Sotheby's in London this week
By GRAHAM SMITH


A year after a controversial biography of Mahatma Gandhi claimed he was bisexual and left his wife to live with a German-Jewish bodybuilder, the Indian government has bought a collection of letters between the two men days before they were to be auctioned. India paid around £700,000 (60million rupees) for the papers, which cover Gandhi's time in South Africa, his return to India and his contentious relationship with his family. The auction was to be held at Sotheby's in London on Tuesday but was called off at the last minute 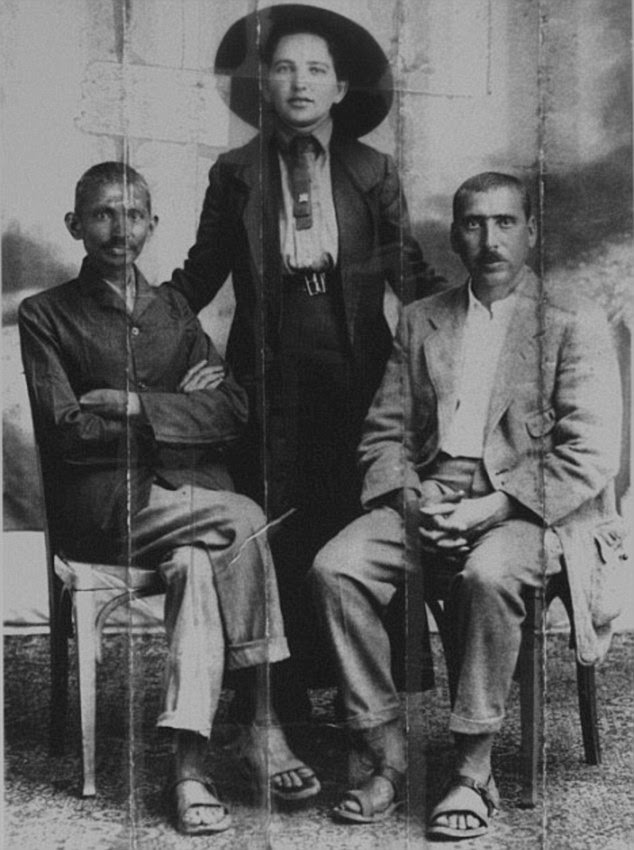 Lovers? Mahatma Gandhi and Hermann Kallenbach sit either side of a female companion. The Indian government has bought a collection of letters between the two men days before they were to be auctioned


The documents will now be placed with the National Archives of India in New Delhi.
They previously belonged to relatives of Hermann Kallenbach, a German-born Jewish architect who met Gandhi in South Africa in 1904 and was impressed by his ideas.
Last year, a Gandhi biography by author Joseph Lelyveld called Great Soul: Mahatma Gandhi And His Struggle With India detailed the extent of his relationship with Kallenbach.
It claimed that the leader of the Indian independence movement was deeply in love with Kallenbach.

Mr Lelyveld denied that his book said Gandhi was bisexual. But Gandhi's home state of Gujarat banned it as an 'insult' to the father of the nation.

Most of the correspondence, which spans five decades from 1905 to 1945, is from family, friends and followers of Gandhi, but there are also 13 letters written by him to Kallenbach.
They reference Gandhi's early political campaigns and the illness of his wife Kasturba.
He wrote in one letter: 'I no longer want to be angry with her so she is sweet... She had a few grapes today but she is suffering again. It seems to be me she is gradually sinking.'
In another, written before his return to India from South Africa, Gandhi wrote: 'I do all my writing squatting on the ground and eat invariably with my fingers. I don't want to look awkward in India.'Indian historian Ramchandra Guha discovered the letters at the home of Kallenbach's grand-niece, Isa Sarid. 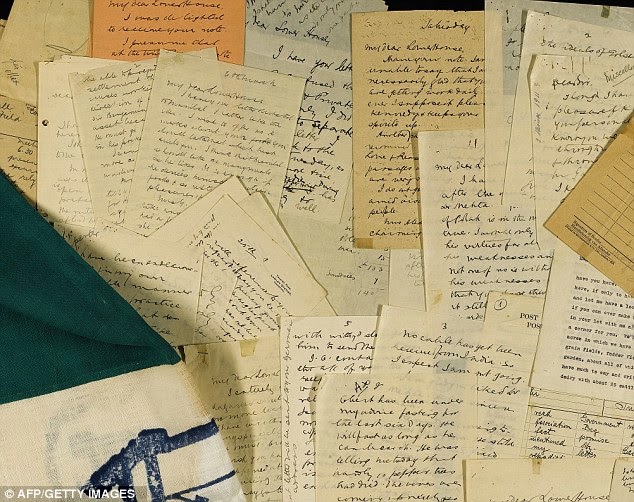 Almost auctioned: The documents previously belonged to relatives of Kallenbach, a German-born Jewish architect who met Gandhi in South Africa in 1904 and was impressed by his ideas
Gandhi and Kallenbach became constant companions after they met in Johannesburg in 1904.Among the most illuminating of the documents are dozens of letters written by Gandhi's sons which provide details of his life in India, particularly in the period immediately after his return, when he lived in relative obscurity.'Father is becoming more and more awful,' read one incomplete letter probably written by Harilal, his eldest son.

'It would not be strange if a time may come one of these days when either those who are living with Father might have to go or he might leave us all not being able to stand our life.'
India has in the past complained bitterly about private auctions of Gandhi's belongings, saying they insulted the memory of a man who rejected material wealth.
A senior official at the ministry of culture in New Delhi said: 'These papers are of huge importance to India to carry out research on the Gandhian view on various things, that is why we decided to purchase them.'
Sotheby's had put a pre-sale estimate of between £500,000 and £700,000 on the collection.
But the sale was pulled after Indian authorities agreed to purchase the entire archive for around £700,000 (60million rupees).Sotheby's said in a statement: 'The Gandhi-Kallenbach archive... has been sold in a private transaction to the Indian government.'Mr Lelyvel's book caused much controversy when it was published last year. 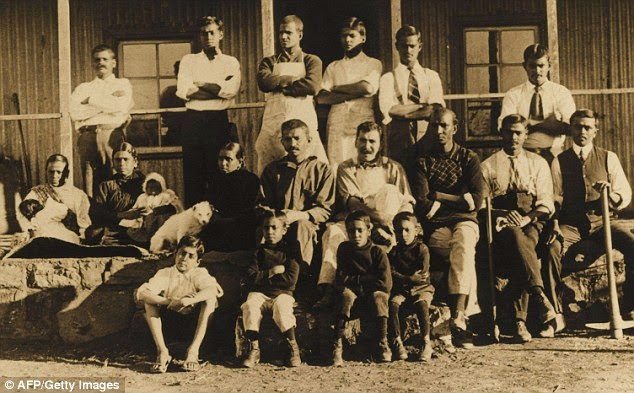 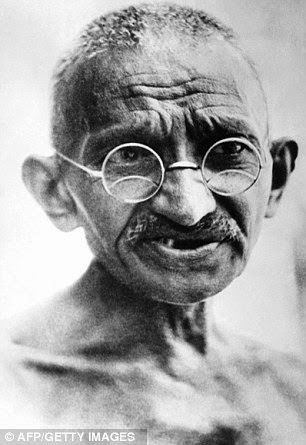 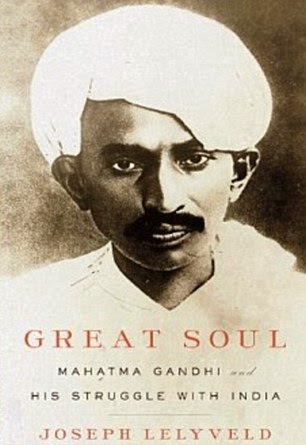 Gandhi and Kallenbach (middle row, centre) pose for a picture at Tolstoy Farm, South Africa in 1910. They became constant companions after they met in Johannesburg in 1904

Gandhi (left) and Kallenbach lived together for two years in a house in South Africa. Joseph Lelyveld's controversial biography Great Soul: Mahatma Gandhi And His Struggle With India (right) was published last year.According to the book, Gandhi allegedly told Kallenbach: ‘How completely you have taken possession of my body. This is slavery with a vengeance.’Kallenbach was born in Germany but emigrated to South Africa where he became a wealthy architect. Gandhi was working there and Kallenbach became one of his closest disciples.The pair lived together for two years in a house Kallenbach built in South Africa and pledged to give one another ‘more love, and yet more love... such love as they hope the world has not yet seen'.At the age of 13 Gandhi had been married to 14-year-old Kasturbai Makhanji, but after four children together they split in 1908 so he could be with Kallenbach, the book says.At one point he wrote to the German: ‘Your portrait (the only one) stands on my mantelpiece in my bedroom. The mantelpiece is opposite to the bed.’

Although it is not clear why, Gandhi wrote that vaseline and cotton wool were a ‘constant reminder’ of Kallenbach.He nicknamed himself ‘Upper House’ and his lover ‘Lower House’ and he vowed to make Kallenbach promise not to ‘look lustfully upon any woman’.
'I cannot imagine a thing as ugly as the intercourse of men and women,’ he later told him.
They were separated in 1914 when Gandhi went back to India – Kallenbach was not allowed into India because of the First World War, after which they stayed in touch by letter.
As late as 1933 he wrote a letter telling of his unending desire and branding his ex-wife ‘the most venomous woman I have met’.