Bharat has lost its Ratna by Sri Narendra Modi

But Abdul Kalam’s light will guide us to his dream destination: India as a knowledge superpower 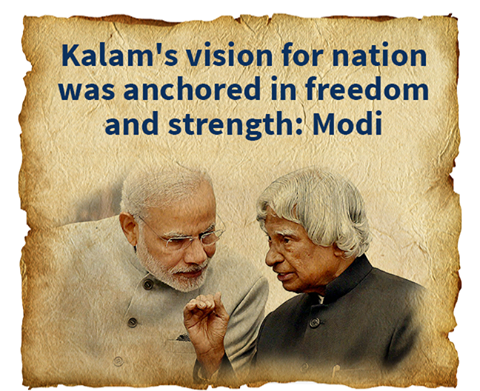 Bharat has lost a Ratna, but the light from this jewel will guide us towards A P J Abdul Kalam’s dream destination: India as a knowledge superpower, in the first rank of nations. Our scientist-President — and one who was genuinely loved and admired across the masses — never measured success by material possessions.
For him, the counterpoint to poverty was the wealth of knowledge, in both its scientific and spiritual manifestations. As a hero of our defence programme, he shifted horizons; and as a seer of the spirit, he sought to liberate doctrine from the narrow confines of partisan tension to the transcendental space of harmony.
Every great life is a prism, and we bathe in those rays that find their way to us. His profound idealism was secure because it rested on a foundation of realism.
Every child of deprivation is a realist. Poverty does not encourage illusions. Poverty is a terrible inheritance; a child can be defeated even before he or she has begun to dream.
But Kalamji refused to be defeated by circumstances. As a boy, he had to support his studies by earning money as a newspaper vendor; today, page after page of the same newspapers are filled with his obituary notices.
He said that he would not be presumptuous enough to say that his life could be a role model for anybody; but if some poor child living in an obscure and underprivileged social setting found some solace in the way his destiny had been shaped, it could perhaps help such children liberate themselves from the bondage of illusory backwardness and helplessness.
He is my marg darshak, as well as that of every such child.
His character, commitment and inspirational vision shine through his life. He was unencumbered by ego; flattery left him cold.
He was equally at ease before an audience of suave, globe-trotting ministers and a class of young students. The first thing that struck one about him was that, uniquely, he combined the honesty of a child with the energy of a teenager and the maturity of an adult.
He took little from the world, and gave all he could to society. A man of deep faith, he epitomised the three great virtues of our civilisation: dama, self-restraint; dana, sacrifice; and daya, compassion.
But this persona was powered by the fire of endeavour. His vision for the nation was anchored in freedom, development and strength.
Given our history, freedom had a political context of course; but it also included freedom of the mind and expansion of intellectual space. He wanted India to leap out of the underdeveloped trough and eliminate the curse of poverty through inclusive economic growth.
Wisely, he suggested that politicians spend only 30% of their time on politics, and 70% on development; a suggestion which he often followed up by calling in MPs from a state and discussing the socioeconomic issues of their region with them.
The third pillar, strength, was not born of aggression, but of understanding. An insecure nation will rarely discover the route to prosperity. Strength commands respect. His contributions to our nuclear and space achievements have given India the muscle to be confident of her place in the region and the world.
His memory is best honoured by the creation of new institutions that nurture science and technology, and enable us to find a beneficial equation with the awesome power of nature. Too often, greed makes us predators of our environment.
Kalamji saw poetry in a tree, and energy that could be harnessed in water, wind and sun. We should learn to look at our world through his eyes, and with the same missionary zeal.
Human beings can shape their lives through will, persistence, ability and sheer courage. But we have not been given the right to script where we are born, or how and when we die.
However, if Kalamji had been offered an option, this is how he would perhaps have chosen to say goodbye: on his feet, and in front of a classroom of his beloved students.
As a bachelor, he was childless. But that is wrong. He was a father to every Indian child, teaching, cajoling, urging, exciting, clearing darkness wherever he found it with the radiance of his vision and the passion of his involvement.
He saw the future, and showed the way. As I entered the room where his body lay in state yesterday, I noticed the painting at the entrance that depicted a few lines from an inspirational book he wrote for children, Ignited Minds.
The good that he did will not be interred with his bones, because his children will preserve his memory through their lives and work, and gift it to their children.
DISCLAIMER : Views expressed above are the author's own.
Courtesy: http://blogs.timesofindia.indiatimes.com/toi-edit-page/bharat-has-lost-its-ratna/
Posted by Unknown at 12:39 PM